In the first part of this review we looked at Furlong’s description of the issues which have faced Education as a discipline, and the ways that these issues have resulted in Education taking up a marginalised position in the University. We ended by tackling the myth that Education is a radically progressive ‘blob’ which has resisted attempts to reform it, and resisted policies which help pupils. Instead what we saw was a sector that has complied with a raft of government changes and initiatives – perhaps to its detriment, and the detriment of pupils and schools as well.

In this post I want to cover some reasons to be cheerful. We’ll look at the changes in Education over the last 30 years which Furlong wants to celebrate, and also discuss why some of his most bleak worries about the implications of the Coalition’s policies for ITE were not confirmed in the 5 years since the book’s publication.

School Direct loomed large as a threat in Furlong’s book. It is clear from Gove’s pronouncements that School Direct was designed to weaken ITE in Universities, by increasing competition between them as to their ‘offer’ to training schools. As time went on the ITT allocations system was used to force applicants to the “School-led” routes by restricting the number of places in HEIs . A particular low point was the year (2015-6) when we had ‘secret’ national allocations for subjects, which meant we were all encouraged to scramble to fill up our books with applicants as quickly as possible, before we received the dreaded ‘stop’ notice which informed us that the secret allocation had been filled, and we weren’t allowed to recruit any more.

A quick trawl through the archives of news and analysis suggests that the unfolding crisis-wave has been longer in coming, and will be longer in washing back out again, especially if those who have the ear of the relevant minister can’t produce some much better advice than they currently do. Some very good courses and providers have closed, victims of the financial squeeze caused by the choking off of allocations, or struck-out by Ofsted in its most unpleasant and dogmatic phase under Michael Wilshaw*.

And yet, in 2018 many of us in HEI routes are still here. The survival of University teams involved in ITE is the surprising outcome of these events and reforms. School Direct recruitment has been excellent at providing alternative routes for those who are suited to them, but there are still large numbers of new teachers who want to learn their new profession with the help of a University. Not only that, the majority of School Direct routes have been created with and by University partnerships. Those HEIs who have embraced School Direct have been able to help schools develop high-quality routes, but have also used this an opportunity to keep HEI teams afloat, as well as an excellent source of developmental ideas. Applicants to ITE routes across provider-led and school-led courses have fallen again this year. Far from removing HEIs from the mix the government should realise that they need us, and that schools value our contribution. Their own reforms having perhaps used up the reservoir of local candidates that needed the flexibility of the School-led routes, have also ignored regional issues, confused new entrants, encouraged bursary tourism and alienated teachers with a strong public service ethos, who find themselves working long hours so that MAT CEOs can earn thousands of pounds a week.

It turns out that whilst a small number of school leaders and politicians may have seen this as an ideological battle, many schools value the work and relationship with their local HEI. At the University where I work we have excellent record on partnership work, which we are actively extending and developing all the time. In turn this work has influenced our ‘University-Led’ route, alongside the internship model used by Oxford University to create a hybrid route which enables our School Direct and ‘Provider-led’ students to gain access to the benefits of both kinds of course. Our trainees and our School partners value the subject specific pedagogy that HEIs can access and have the time to teach, as well as the support for difficult times that a dedicated team of IT Educators can bring to bear. In short we are still here because we have a role to play.

But this might not be enough. John Furlong worried about the ability of HEIs to advocate for a role in ITT, following the practical turn which has seen ITE regulation focus on a narrow set of skills set out in the Teachers’ Standards (2012). Part of his answer involves introspection, in the shape of an examination of the purpose of the University. Chapter 10 is a discussion of four archetypes, in the shape of Newman, Hubolt, the ideas behind Scottish Enlightened Universities and ‘Mass’ Higher Education in the 20th Century. This chapter really should be read by all new entrants to Teacher Education, given that such academics usually come from the world of school-education. Furlong gives us excellent context to help us understand the different roles that we undertake in University, and the tensions that show up in our day to day work. Furlong also helps us see an educational role for Universities which is very valuable in the current climate of marketization, where it is tempting and lucrative to see the University merely as a machine for validating qualifications devised and delivered by others. This is especially the case where such qualifications merely recognise previously developed knowledge or skills, or even experience.

For Furlong, even if we find ways to use these sometimes competing ideas to help us understand out roles, we risk not recognising or addressing the issue of the complexity of knowledge and truth. Rejecting the post-modern ‘anything goes’ approach, Furlong also asserts that we cannot treat knowledge as un-problematic. He concludes that Universities should instead maintain a commitment to the pursuit of truth, but rather than seeing truth as an end-point, it should be characterised as process or transaction which, borrowing from the ideas of Lay, he calls “a commitment to the maximisation of reason”.

This transaction is described as a dialogue, the requirements of which are exacting and serious. 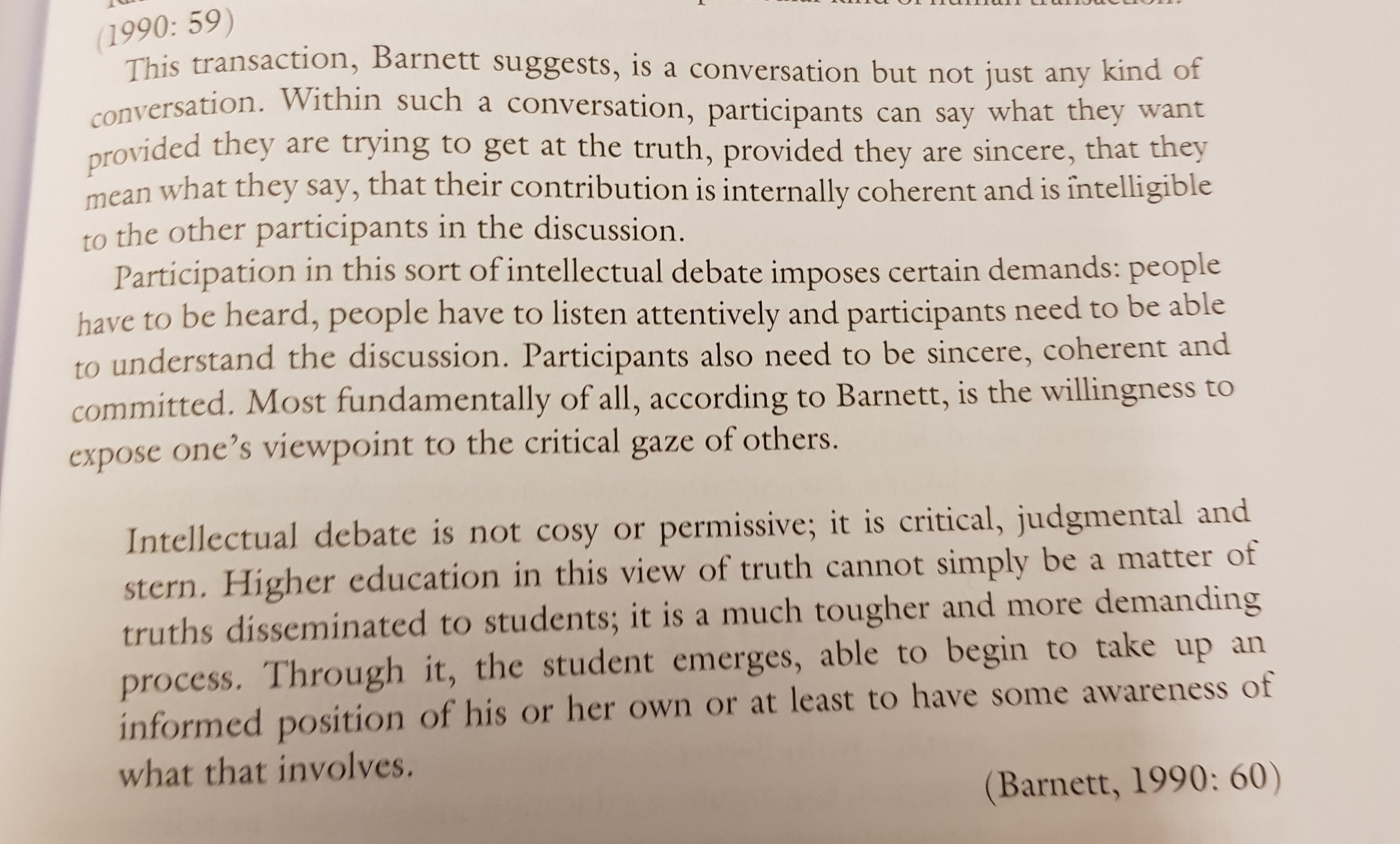 The implications of this transaction I’ll discuss in my next post.

A review of Education: An Anatomy of the Discipline, by John Furlong (Part 2)