I  have read such great history around the web this week, that I thought I’d compile some of it into a post.  Most of what I’ve spotted here should be directly relevant to teachers at KS3-5.  A good example of that is the fascinating life and views of John Lilburne, described by Michael Braddick over at Sheffiled University’s History Matters blog.  Lilburne provides the kind of life and example that we can use to great effect in the classroom, in order to ask questions like ‘why did he spend most of his life in prison’, or perhaps considering his historical significance (or lack of it!).  We might instead compare his treatement to that of Henry Vane or John Lambert in asking whether the Restored Monarchy was really as reconcilatory as the Declaration of Breda might suggest.

I have also been listening to the amazing podcasts at Alex Ford’s Meet the Historians.  This is a really exciting and ambitious project to enable students to access the thinking of historians through an interview with their history teacher.  Alex asks some really interesting questions, and the historians are given the time and space to answer. What I like most about the series is the example that Alex sets to us and his students.  What I take from this is that history is not only something that we have learned, it is something that we do, and something that we can keep on doing.   Secondly,  I think about the times we might vaguely exort our students to ‘interact’ or ‘engage’ with the sources. From this podcast students can hear, and perhaps understand what interaction with a historian might really mean. 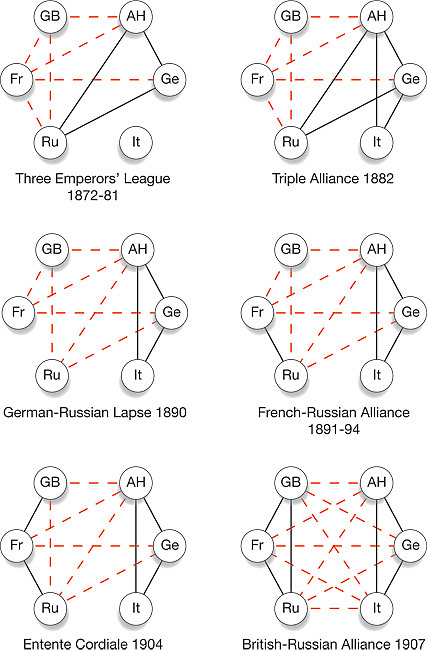 I was drawn to this post by Scott Allsop‘s tweet.  The article itself is bit rambling, but it gets interesting right about where it discusses using diagrams to show relationships between countries, and in its central idea that devices such as these can ‘force us to expand our conception[s]’.  I often use diagrams and simplified maps to try to explain complex things. As always the devil is in the detail, but figuring out the detail can help students to understand where the limits of their knowledge are, and to put the detail back into the big picture.  As an example I asked my own students to update their diagrams of the feudal system last week.   They came up with some interesting ideas, including a feudal donut, with the king in the middle.  One really interested me.  It showed a house with a small dank cellar in which slaves worked, and two lower floors for Villeins and Freemen.  These floors were connected with stairs, which also led to the upper knightly and aristocratic floors, and finally to the attic where the King resided.  Crucially some of the stairs had baby gates installed, to make it harder for people to move upwards. This made it nearly impossible to become ennobled, but relatively easy to slip between free and unfree status depending on whether you could afford to rent land.  I can’t claim that this is a finished or full understanding of the feudal system, and I think that what’s going on here is the replacement of weaker for stronger misconceptions. It’s certainly better than the boring old Feudal pyramid that in the past I have taught in one lesson, and which then they forget.

Thinking about how history is done, over on Gaby Mahlberg‘s blog there is a really interesting post in which she reviews Writings of Exile in the English Revolution and Restoration by Philip Major.  The book itself deals with the culture of Royalists at home and those exiled beyond England and seems to offer a glimpse into the way Royalists dealt with the dislocation and loss that comes of exile.  However, what grabbed me was the way that Mahlberg describes these topics as a “newish and still only patchily explored field”, and her judgement that the book “posed many important questions, successfully answered some, but also left enough for the rest of us to puzzle over”.  Mahlberg’s review is not a question of whether Major’s ‘interpretation’ of exile was ‘correct’ or ‘accurate’, rather she seems to suggest that history is a joint-venture between countless eyes and hands, all of which build on each others’ work.  Not only that but, as there will always be new fields to be explored, the work of history cannot be finished.  I’d add that old fields can often contain new surprises.

Great History spotted on the Web