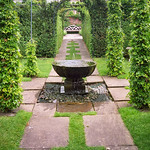 Last week I took an overview of all the environment studies. Though they’re (mostly) worth around 10% of the GCSE I wonder if they’ll be giving many HODs and teachers something to worry about as they start to think about their choice of board and specification. This is mainly because they concept of an historical environment study will be new to many teachers, especially those who have been doing modern world teaching (as I have).

This week I want to look more closely at AQA’s offering. They’re interesting because they are so closely embedded in with the depth study that they’re associated with. The questions allow students, (actually require) students to use their knowledge of events and society in the period studied, it’s fashions and pre-occupations in writing answers.  This means that the period study content should be read side by side with that of the H.E. study. Also, the kinds of locality that are implied for each H.E. should be taken into account when planning which unit to teach.

The two early periods have a strong military focus.  The Norman period could imply studies of early castles, such as Pevensey, whilst the Medieval unit, with it’s focus on the conquest of Wales suggest the development of castles such as Builth Castle in Powys.  The earlier Norman period has a focus on military tactics and innovations that is not present to the same level in the Medieval study, though both units mention battles that could be the focus of future H.E. assessments.

However, both also have strong social history aspects. So, whilst the Norman period has a focus on the village which would enable the board to set a medieval village location, and a focus on the changes that the Normans made to Cathedrals and churches, the Medieval study focuses on the development of towns.

The Elizabethan unit is the one I find hardest to pin down to particular locations, or types of location. The focus on the rise of the Gentry and of living standards might mean a focus on the homes of the nobility – indeed this is the focus chosen for the specimen assessment material.  We could also read into the content on the church a study of Protestant or Catholic places of worship.  The spec also mentions theatres, so putting a tenner on the Globe being one of the locations might be an option.

The unit on the Restoration has more to go on in terms of possible focuses for H.E. locations. Theatre is an obvious choice, as is Medway in Kent, the scene of a famous naval disaster.  The big star of this unit seems to be London, with a focus on the plague of 1665, and the fire of the following year, coffee houses and Samuel Pepys, the focus on fashions and the changing face of the city being obvious.

Whilst looking at the specimen assessment materials confirms how much these H.E. studies are embedded in the context of each depth study, common threads in the approach to assessment across the studies do emerge. For instance, the questions emphasise the context of each locality, asking about the use of castles to control areas in the Norman and Medieval studies, or Restoration fashions reflected in Bolsover Castle.  The mark schemes show however that there are strong preferences for answers that focus on the design, materials, as well as the symbolism of the various features of the locality concerned.  This is really exciting stuff – students will be given an opportunity to get to grips with the physical aspects of the past that we have not had the opportunity to introduce them to. Additionally they will be asked to think in terms of the mentalities of the past, to understand how buildings and places had such an impact on the minds of those living in the periods we’ll be studying.