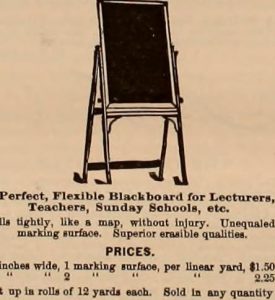 The latest book is E.D. Hirsh’s ‘Cultural Literacy’. In my last post I discussed some of the things I liked about the book, and my concern with the foundations of Hirsch’s theory – that faster reading is a cure-all for educational ills and problems of learning.  In this post I’m starting to discuss the most obvious problem, Hirsch’s somewhat limited conception of what it means to learn, and his curiously passive learner, which I’ll follow up in my next post.

For Hirsch, the underlying assumption of learning is one way. Rather than transaction we have transmission. Rather than active construction we have accretion. Knowledge must come first, communication second. This also renders the world as a passive place, to which we can only apply pre-learned knowledge, which was itself received as a transmission from a more knowledgeable other.

Hirsch’s model of learning is one of assimilation – making things fit in with what we already know.  This is directly related to his focus on reading fluency;  ‘slowness of reading beyond a certain point makes assimilation of complex meaning impossible’ (P.57).  So forming complex meaning is only possible through assimilation and only when this assimilation is achieved through fluent reading. This, in turn, can only occur when reading things, in respect of which the reader is already knowledgeable, or which are culturally familiar to them.   This logically leads us to the conclusion that facts, knowledge must be learned before they can be applied. Assimilation of material here is overlaying confirmation of what is already learned, what is pre-assimilated.

For Hirsch this assimilation is natural – and one dimensional, relying as it does on memorisation and rote-learning. Hirsch objects to the ‘pious rather than realistic’ rejection of this method of learning that he detects in contemporary educationalists. Without supporting evidence beyond the anecdotal Hirsch asserts that children at an early age have an ‘almost instinctive urge to learn specific tribal tradition […] and are eager to master the materials that authenticate their membership in adult society’ (30). He points to the eagerness with which children hoover up the rules of their favourite sport as an example of how ‘memorisation’ should be re-examined as a way of helping children to learn.

This is probably not the time or place to rehearse arguments about rote-learning -v- strategies and ‘which works best’.  Suffice to say that for me, using ‘memorisation’ as a way of learning things seems to be something of a tautology – “We memorise to remember things”.  It also sets up something of a dichotomy which I would argue doesn’t really exist in most classrooms.  It’d be hard to find even the most traditional teacher ‘just telling them’, or relying only on memorisation of facts.  Similarly, it would be hard to find a ‘progressive’ teacher who deals only in subjective opinion, or who facilitates learning only through discovery.  In practice most teachers will tell some things, encourage memorisation of some things, facilitate exploration of some issues, and use discovery and suspense in relation to others.

Willingham suggests that the kind of knowledge that we might pick up only through rote-learning is going to be shallow.  Hirsch can just about make the claim that rote-learning could be a useful method of assimilating new knowledge only because he has set a low bar on the depth of that knowledge.  Hirsh directs us to teach a broad and shallow set of knowledge.  I would argue that by not encouraging students to see the deep structures of problems, shying away from analogies and exploration, and by failing to point out that there are problems with some (not all!) items or types of knowledge, we risk restricting the extent to which knowledge can be transferred to new problems.

We might also missing a trick or two as educators.   There will be key pieces of information that we all want students to know, and to be able to recall.  Repetitive rote learning will play a part in learning these facts.  However, we’ve got to make sure that these are the right kind of facts to be learned in this way, that these facts are correct, and that we give students a chance to see the deeper relations and structures between them.

As an example of the way that the ‘knowledge turn’ in pedagogy risks cutting off learning opportunities from our students, let’s take a look at the idea of ‘knowledge organisers’ in history.  I’ve used these – though I called them ‘glossaries’, and often I took the idea of ‘advance’ organisers as a model (for more on this see Ausubel’s ideas, set out in http://citeseerx.ist.psu.edu/viewdoc/download?doi=10.1.1.1004.3954&rep=rep1&type=pdf#page=34).  Their most recent popularity stems from a post by Joe Kirby on his brilliantly helpful website ‘pragmatic reform’. https://pragmaticreform.wordpress.com/2015/03/28/knowledge-organisers/ 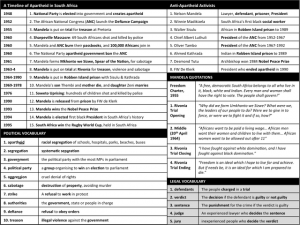 There are some really great things about this – the careful thinking that has gone into deciding which items of knowledge the students will need, the focus on common spelling errors, key quotes to add compelling context and colour to students’ knowledge.  This is Hirsch in practice, in that brief, and shallow descriptions in the manner of vocabulary definitions are given.  However, in dealing with some, more complicated, concepts in a shallow way important misconceptions are introduced.

Multi-faceted historical contexts are also flattened. Democracy is not defined here, it seems to be taken for granted that students will understand perhaps a platonic model of democracy.  The very point about Apartheid era South Africa is that there were two competing models of democracy. Supporters of the regime would have denied that their country was un-democratic.   Often we can give helpful definitions, but that is not always true, and often we need to do much more. I’m not suggesting for a minute that Joe Kirby doesn’t do just that, but I worry that the impression is that all the knowledge needed can be fitted on one side of A4, and delivered to passively waiting students.

Of course, many people use KOs, and other similar techniques in lots of ways, but these all seem to be much more than ‘memorisation’, and in ways that build much deeper knowledge structures.  Toby French has a great post (https://mrhistoire.com/2017/01/19/kos/) which puts his use of KOs in the context of his wider practice, for instance.  I would go further, however.  Students need time to assimilate, accommodate, test and refine their understanding of concepts about a historical context.  We might start by exploring what democracy, what a political party means to them today, before comparing that with the views and experiences of those living in South Africa during Apartheid.   We might then ask them to fill in a few knowledge organisers (or to explain some concepts) so that we can assess the development of their understanding, and refine our own planning for future learning.

In other words, teachers also need to listen to their students’ ideas, not only to correct their students, but so that they as teachers can refine and perhaps improve their own understanding.  In fact this final point is the thing that people have been trying to teach me for years – from my PGCE tutor, Anna Pendry who gently suggested that I read some more history books, to the parent who rightly complained when I mistakenly told his son that Sefton Delmer wrote for the Daily Mail. The wonderful students who have asked me hard questions that forced me back to my books, and the wonderful teachers who have made me look again at source materials or asked me to think about how I approach what I thought was a familiar topic have, over the years helped me to see that I am also learning.  Unlike Hirsch, I recognise that as teachers we also need to approach ‘truth’ afresh, and sometimes through the eyes of others.  Attempting the delivery of a chunked up world does not help me, or my students, to do that.