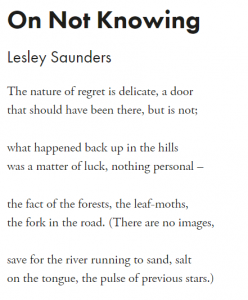 Sometimes, often in the long night, we think back over things we’ve done. After a good day, these are often cinematic valedictions of the brilliance of our achievements, the goal scored, the child saved, the answer to the quiz question about the Battle of Crecy that seemed to so impress that beautiful student-dentist all those years ago.

After a bad day two ghosts haunt me in the milky darkness of our bedroom. Both are students. One is a year 7 who left our school, the other a year 11 with whom I could not make the necessary connection.

The year 7 came on a wing and a prayer. On ‘senior staff call-out’ (the real senior staff were in a meeting) I picked him up several times in the space of a week. I was stressed, tired and pulled away from something really important when I was told to collect him from MFL. After some defiance in the classroom I’m afraid I lost my temper and shouted good and loud at him until he left the room and sidled off to the internal exclusion room. He stopped in the doorway of the classroom just long enough to shout ‘FUCK OFFFFFF’ in my face (this was the second of the two times this happened to me in 13 years of teaching there).

There followed a temporary and then permanent exclusion. He was, I console myself, already well on the way towards this. But, I can’t help feeling that I pushed him over the edge, and that had I continued to ‘be the adult’, in the way that I expect of myself and the people I work with, that some other conclusion might have been reached. Exclusion has a terrible impact on pupils, I wish that I had handled myself differently – each interaction is a chance to change the future.

The year 11 had started off well in year 7, but became angry as her schooling went on. I had no idea why, and if anyone else did they neither found a way of explaining to me, or dealing with it well in school. She had achieved very well in school until year 9, and then fell off an emotional cliff.

None of this worked with this child. She challenged, everything, and each re-statement of the rules was greeted with an escalation of challenge. Removal to other teachers was the only way to get the rest of the class the attention from me that was needed. The only way around her attitude was to ignore, or to acquiesce. I tried a bit of tactical ignoring, of lowering the stakes of the confrontations by keeping them calm and low key. Praising when she did well (which she could easily do) was quickly abandoned as it resulted in a backlash of dreadful proportion. These short term tactics led to longer term problems. She spent the last 8 weeks of the course doing history with a TA in another room.

Again, I console myself with the knowledge that other teachers had the same problem, but my lack of answers, my lack of purchase on her learning left her with poor qualifications, and me with a second regret to reflect upon in my long nights.

Why am I telling you this? I’m not sure really – possibly I’m just getting it off my chest. I worry that all the talk of schools being ‘engines of social mobility’ and our ambitions for our students and ourselves can leave us exposed to dangerous feelings of failure when things don’t go well. Doctors’ patients sometimes die. Students sometimes don’t learn, despite our best efforts, and sometimes because of our mistakes. We have to learn to live with this.

The ones that got away.

3 thoughts on “The ones that got away.”