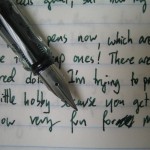 My undergraduates are unwilling to argue, in person, or in writing. Their essays are often surveys of a scene, descriptions of a landscape. There’s nothing necessarily wrong with a survey if that’s what you’ve been asked to do – but I want my students to have an informed opinion – and to have practised the art of coming to an opinion – so that they can work out when it’s necessary to change their minds about something.

So, in order to do that we’ve been presenting arguments.  This is something that I have done in the past with AS students who have often struggled in the change from more descriptive answers at GCSE to the direction and argument of an KS5 essay.  The discussion that follows will clearly show that my thinking is often influenced by my practice as a history teacher and the professional literature in Teaching History journal from the HA, or books written by teachers or academics such as Christine Counsel.  As I am still new to HE – I’m painfully aware that there is a body of evidence and practice which I’m starting to explore. On the off chance that you’re reading this and you think I should really know about something that I don’t – please feel free to let me know!

We’re coming to the end of a module that I’m teaching on “Special Educational needs and Inclusion” which has focused on the history and conceptual underpinnings of ‘inclusion’, and the tension between this and ‘differentiation’. Part of the assessment is for the students to write a short essay on an aspect of inclusion – they have a choice of questions, but each one requires them to come to an informed judgement.

My students see essay writing as a kind of complicated obstacle course.  They like to tackle each part as it comes to them,  instead of lifting their heads to the horizon.  This leads them to focus on issues such as ‘how to write a good introduction’ or what should go in a ‘good paragraph’. I’ve been trying to encourage them to see an essay as a way of communicating with a reader – and a way of persuading that reader.

I’ve also noted that these undergrads have trouble differentiating between the big and little points of their developing argument – and will often conflate these, meaning that the paragraphs they write are sometimes ‘scatter gun’ – they will cram in all the things that they can think of to do with the topic in the question – rather than attempt to actually answer it.

I suspect that these students have not seen enough examples of academic writing, and have not spent enough time considering the style of different academic writers, let alone their own.

These are the issues I perceived from the other pieces of writing that they have done for me before this module, and from their directed task submissions.

They had a choice of essay titles for this module – and in order to make them read these carefully (so that they’re not tempted to ‘do’ the one that they recognise some key words from) they were asked to look down the list and then spend 5 minutes drafting a one line answer to the question.  I explained that this was the kind of answer they might give if someone asked them a question like this on the bus, or in discussion with friends.

We then looked back at some model essays written in response to questions that were asked on the module the year before.  These were different from this year’s question.  I wanted them to be clear that they were reading good academic writing – not ‘good answers’ to the questions. They were asked to use highlighters to look for examples in the text of the following things:

They were also asked to work out what the writer’s ‘one line answer’ to the question might have been.

A multi-faceted ‘One Line Answer’

When they’d done that, and following a discussion of some of their examples, and of the ‘one line answers’ from the model essays, I asked them to look again at their one line answers, and to re-write them, using the following words if they could:

I wanted them to learn that their one line answer could contain a more nuanced line of argument, or perhaps an acknowledgement of another perspective or even some indication of how universal their ‘one line answer’ was.

I also decided to ask them to present their plans as part of one of their directed tasks, using a template which acts as a kind of ‘speaking frame’.   They presented these arguments in support of their ‘one line answer’ to their peers. Their peers were then encouraged to ask questions that will help them understand the argument that is being made.  I was hoping that this would act as a kind of dry run for writing the assignment itself, in that it would help them clarify their ideas.  wanted to see if their role as presenters of an argument would help them become writers of an argument.

Not bad – the sessions in which we looked at ‘model’ essays were very interesting – there’s still some work to do in helping them see what the ‘big points’ are in models of academic writing.  I’m also having to think quite carefully about the kinds of things I want them to read – academic journals often are not full of ‘essays’, and ‘education’ undergraduate textbooks on these topics are often quite descriptive. I think that getting them reading more pieces of writing in which people have made and sustained arguments is the key way in which they will understand how this works.

During the presentations it was clear that whilst many had now made the leap from ‘survey’ or ‘everything I know about’, and were starting to think in terms of ‘what’s my argument’, some of these students were still hesitant in making definite and confident choices in selecting evidence or ‘little’ points to support these arguments.

Overall the level of writing has improved across the group.  Many more of these students are writing in shorter, much more focused paragraphs – even if they have not yet made the leap to argument.  Those that have made that leap are often writing sharply focused sections in support – though sometimes this is not sustained throughout.  Those that engaged more wholeheartedly in their presentations tend to be those who have gained the most in these improvements.  Next time we do this I’ll ask for permission, before we start the process, to share their work online – so that I can us it more precisely here.

6 thoughts on “Writing to Argue”