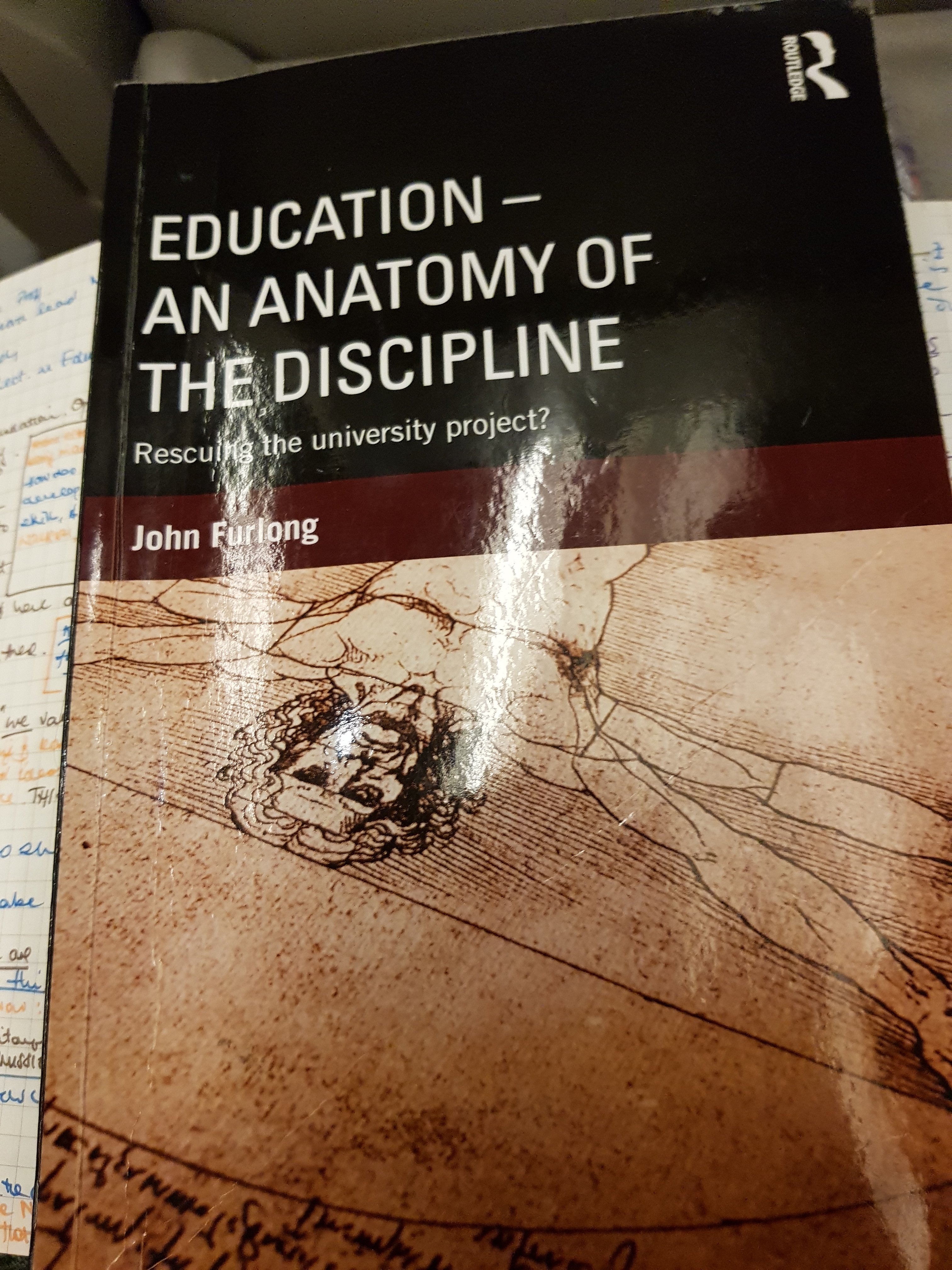 I found this book to be really informative, and in many ways empowering – it’s especially helpful to me as a relatively new entrant to the job of overseeing the work of Initial Teacher Educators, and it has given me some excellent ideas about how to develop our work as a team. Focusing on the inherent complexity of the discipline of Education (and at the same time a claim that Education can be seen as such), this book is also partly a record of the troubled history of Education’s journey to its place in the University. As an analysis of the reasons why Education’s place in University has been marginal and insecure since that arrival, Furlong can then offer a set of ideas and suggestions for “re-tooling” the discipline in University.

The book spends a good deal of time explaining the complexity inherent in a discipline founded on four other disciplines: Philosophy, History, Sociology and Psychology. This complexity has further layers resulting from the various different birth-places of the study of Education, Universities, Colleges, Normal and Day training institutions, each of which were subject to different values and sources of control.

The argument is that Education’s eventual assimilation in the early 90’s in the Academy was a pyrrhic victory: partly because of these pre-existing tensions, but also because its arrival coincided with a period of reform and government interventions based on a neo-liberal response to the challenge of globalisation. Furlong’s clear exploration of the implications of neo-liberal policies which successive governments “imagined” as being the only response to globalisation is an especially useful and cogent setting in context to those of us who find ourselves working in Initial Teacher Education, and should be required reading for new entrants into this world. In setting out the impact of marketization, competition, regulation of content and structure of courses, and of new public management based on metrics and internal fragmentation into competing units the book goes a long way to help explain why my work sometimes feels the way that it does. It also amply explains why many Uni-led ITE courses had come to focus so much on the practical and to slip away from their foundation disciplines by the early 90s.

The reforms since then, employment based routes, SCITT, School Direct and now Apprenticeships, are natural extensions of the implications of these policies. Now that ITE has become ITT, and has come to focus more and more on the practical, then it becomes hard for Universities to advocate for a distinctive role for the HEI in the process.

Indeed, the coverage of the policy changes and continuities between New Labour and the 2010 Coalition governments (the book was published in 2013) suggests that, far from being the militant and radical ‘blob’ characterised by Michael Gove as ideologically resisting any and all sensible government developments, a picture emerges of a University sector meekly complying with policy shifts and turns. These have included successive ITT curricula, submission to Ofsted inspection, reformed and re-reformed Teachers Standards, a centrally mandated Masters in Teaching and Learning, its subsequent removal, and most importantly the embracing of the world of School Direct, SCITTS and Teach First. Since publication we could add the Carter Framework, several Inspection Frameworks, as well as boom and bust asphyxiating NCTL allocations.

The focus being on the epistemological, pedagogical and historical fragmentation of the discipline and the forced dependence on externally imposed technicist standards and overweening government regulation this book could well start to read a little bleak for those of us working in ITE, especially if most of our work is in this area. However, this is also a hopeful and indeed an inspiring book, as I hope to convince in the next post. I’ll look at how Education in the University has perhaps avoided some of Furlong’s most negative worries, even though it remains on the margins especially where such work involves working with new teachers.